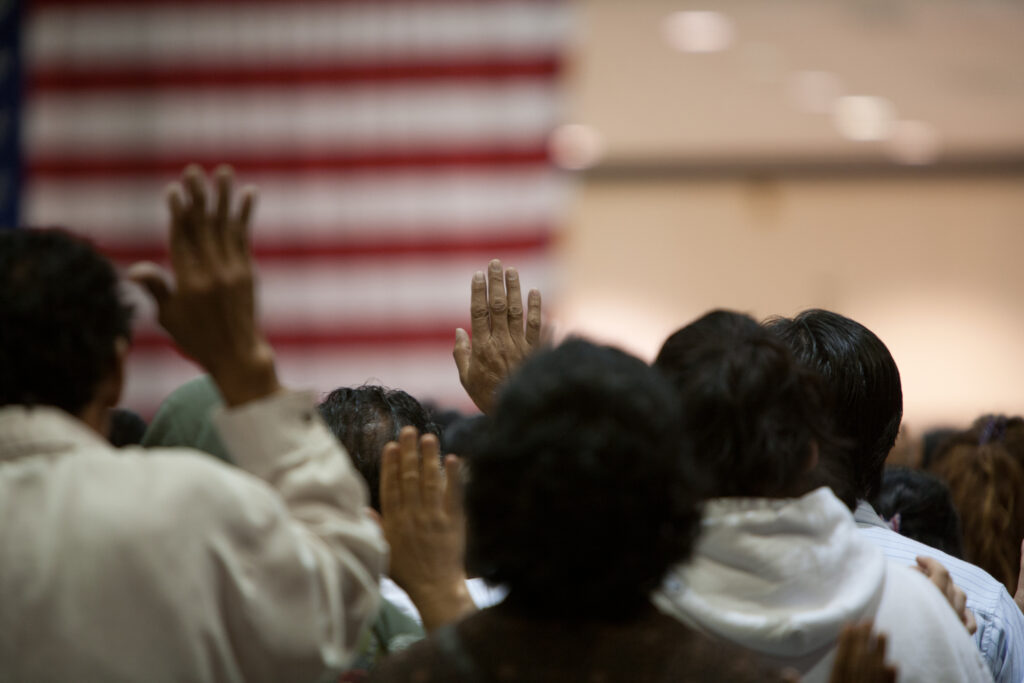 Whether she is giving a speech at the American Heritage Awards or fixing the legal status on a U Visa application for a client, Lorena Rivas is proud to be an immigration attorney.

Nothing, however, may make Rivas – a four-time Super Lawyers® Rising Stars selection – prouder than when she witnesses one of her esteemed clients is takes the Oath of Allegiance and is sworn in as a naturalized United States citizen.

“It is immensely moving,” Lorena Rivas said. “The ceremony honors the courage, strength, and determination it took for them to not just leave but typically flee their native country due to threats of violence and persecution. It is the culmination of a very long and emotional process.”

As Rivas indicated, the process is long and daunting for many. Not only does it call on candidates to make the gut-wrenching decision to leave their homeland and enter a new country, but they must also learn English and go through multiple interviews and background checks before taking their Oath of Allegiance some 18 to 24 months later.

Although immigration reform continues to remain a hot-button issue among many, more and more Americans are in support of a path to citizenship for undocumented immigrants in the U.S.

NewsNation reported that nearly 70 percent of Americans supported a path to U.S. citizenship to those living in America undocumented.

The 70 percent clip is significant because, as the publication reported, majority support for a path to citizenship has never reached the 60 percent mark.

“Despite whether you think there should be more immigration or less immigration, whether or not you think there should be a wall or not be a wall, 70 percent of Americans think that, ‘Hey, if you’re here illegally already, you should at least give them a path to citizenship,” said Scott Tranter, an adviser for Decision Desk HQ, which conducted the research on behalf of NewsNation.

Tranter reinforced the mark of the poll’s 70 percent support, stating that: “It’s hard to get 60 percent or more of Americans to agree on anything.”

Although the Coronavirus Pandemic has limited the amount of naturalization ceremonies taking place in Oklahoma and elsewhere in the United States, TulsaPeople reported in January 2022 the following numbers:

11 naturalization ceremonies were held in 2021.

616 Tulsans have become naturalized citizens since 2019.

25 children took oaths of allegiance to the United States in 2021 at the City’s first child citizenship ceremony. The majority of these children derived U.S. citizenship because their parent(s) naturalized.

The publication also stated that “Tulsa’s naturalization ceremonies stem from the City of Tulsa’s New Tulsans Initiative, a comprehensive roadmap launched in 2017 to welcome immigrants and refugees by fostering connections between them and long-term residents.”

President Joe Biden has proposed an immigration plan which would provide a path to citizenship for an estimated 10.5 unauthorized immigrants.

Lorena Rivas fully supports the plan. The talented Tulsa-based immigration attorney would like nothing more than to attend more naturalization ceremonies.

“I think much of what people hear these days about immigration is negative, which couldn’t be further from the truth,” Lorena Rivas said. “When someone takes the Oath of Allegiance, you can’t help but be moved by the sacrifice and effort they’ve made. They are people with complex histories and lives.”